When Urth Caffé guests enjoy lattés made with Urth Italia Espresso™ – a rich and strong, medium dark roast espresso – they may not know it is a blend of coffees from Eastern Africa, Indonesian, Central and South America.

Brazil La Fazenda Cachoeira coffee – one of the finest beans in the world for espresso – offers flavors of milk chocolate and hazelnut with a rich, thick, red crema.

"We love this coffee and the story behind it and are proud to work with it year after year!" he continued. "We endeavor to purchase a quantity that will last us all year, until the next harvest arrives. Generally that means buying all that is available." He blends the coffee also into Urth Caffé's dark roast Manhattan Mudd™ coffee.

Urth Caffé was introduced to Miriam Monteiro de Aguiar, Fazenda Cachoeira Farm owner and operator (above), by a Brazilian coffee farm liaison for Urth Caffé, in 2017.

"Visiting the nearly 200-year-old farm of Miriam Monteiro de Aguiar is a bit like stepping back in time. Miriam's family home has changed little since the farm was first established in 1840. Fazenda Cachoeira (meaning 'waterfall'), is owned and operated by 6th generation coffee producer Miriam Monteiro de Aguiar. Among the finest producers of organic micro-lots in Brazil, Miriam has dedicated her life to sustainable and biodynamic agriculture," the liaison wrote.

In a country dominated by large-scale chemical dependent farming, it's exciting to see smaller farms like Fazenda Cachoeira bolstering the reputation of organic micro-lots from Brazil and inspiring other producers to follow suit.

Composting is a key element to sustainable agriculture. The fruit, skins and all organic debris is recycled after processing to make rich, natural fertilizer for future crops. Cross-cropping and intercropping of other kinds of fruits, vegetables and nitrogen replenishing plants within the coffee plantation plays a major role in protecting soil vitality and providing economic diversity for the growers.

Miriam shares her extensive knowledge with producers by holding workshops on sustainable farming practices and quality control at Fazenda Cachoeira. She is especially interested in helping other women producers get their start and is a highly visible advocate for women in Brazil's coffee industry by serving as a member of the Brazilian chapter of the IWCA (International Women Coffee Alliance). 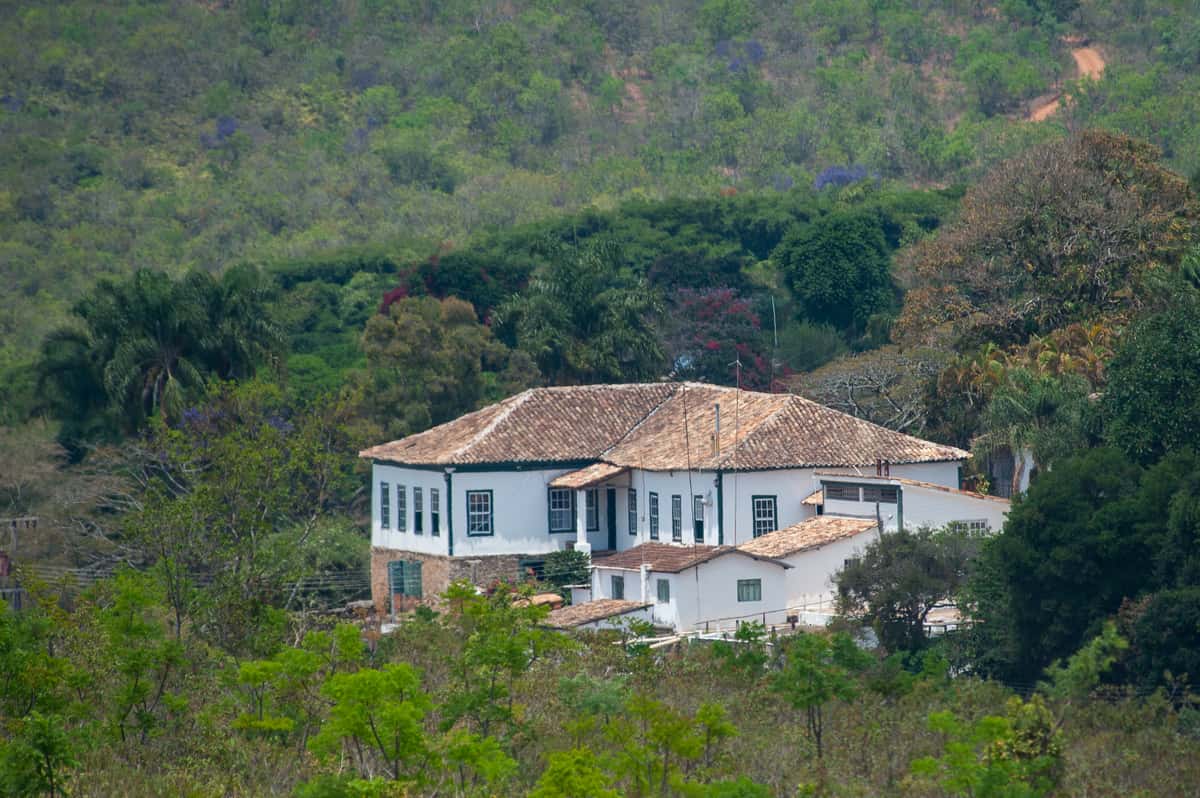 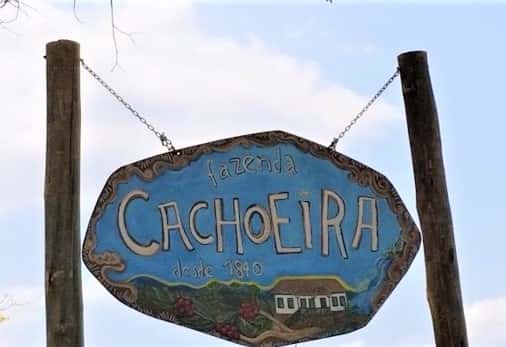 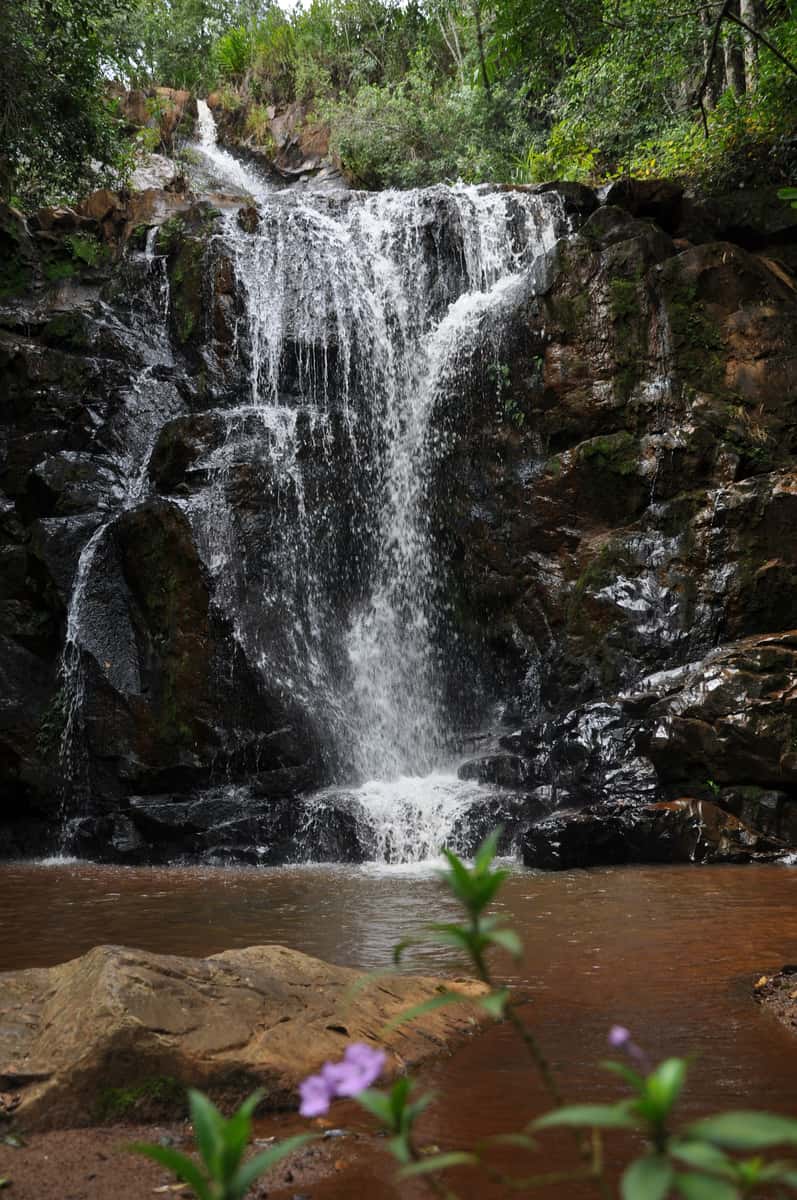 "The hard work at the farm level comes through in the cup," explained Zachary Fogel.  "The green coffee is meticulously prepped, processed, and sorted resulting in an uncommonly even roast and a clean, balanced cup with big body and rich syrupy crema in espresso."

Since then Urth Caffé buys all of Miriam's highest quality crop and she puts the Urth Caffé coffee cup logo on each of her coffee's 100-pound burlap sacks.

Miriam Monteiro de Aguiar was born in Santo Antonio do Amparo, a village in the Campos das Vertentes region on the southern border of Minas Gerais state in Brazil where her Fazenda Cachoeira is now located.

She grew up on a coffee farm and attended the village's public school. "The ripe coffee beans have been part of my memories since I was about 10 and swam in the coffee tanks. It was all about coffee – especially during the harvesting season, when the work would last till late hours," she recalled.

When Miriam was 14, she had the opportunity to leave the village and move to my uncle's home to study. Years later she graduated in Sociology and came back home to work in the Rural Development Project of her family's farm and the area.

Her father was a pioneer in growing quality coffee and was always passionate about learning and sharing his experiences. "I learned so much from him! In a traditional society, having an only child – and especially a female one – would sound very unpromising to a parent. But not to my father. He always encouraged me to study, travel and learn as much as I could," she recalled.

The region to which she returned is perfect to produce high quality coffee. The altitude there is about 1,000 meters, and the annual precipitation index accounts for almost 60 inches. Such perfect conditions are found in a stunning landscape that alternates lavishing green mountains and plateaus.

In 1989 Miriam married Rogério, a musician from São Paulo, Brazil's most populous city. Three years later, they moved from to Fazenda Cachoeira and dedicated it to cultivating organic coffee. Her musician husband became a passionate organic coffee producer.  They have three daughters. 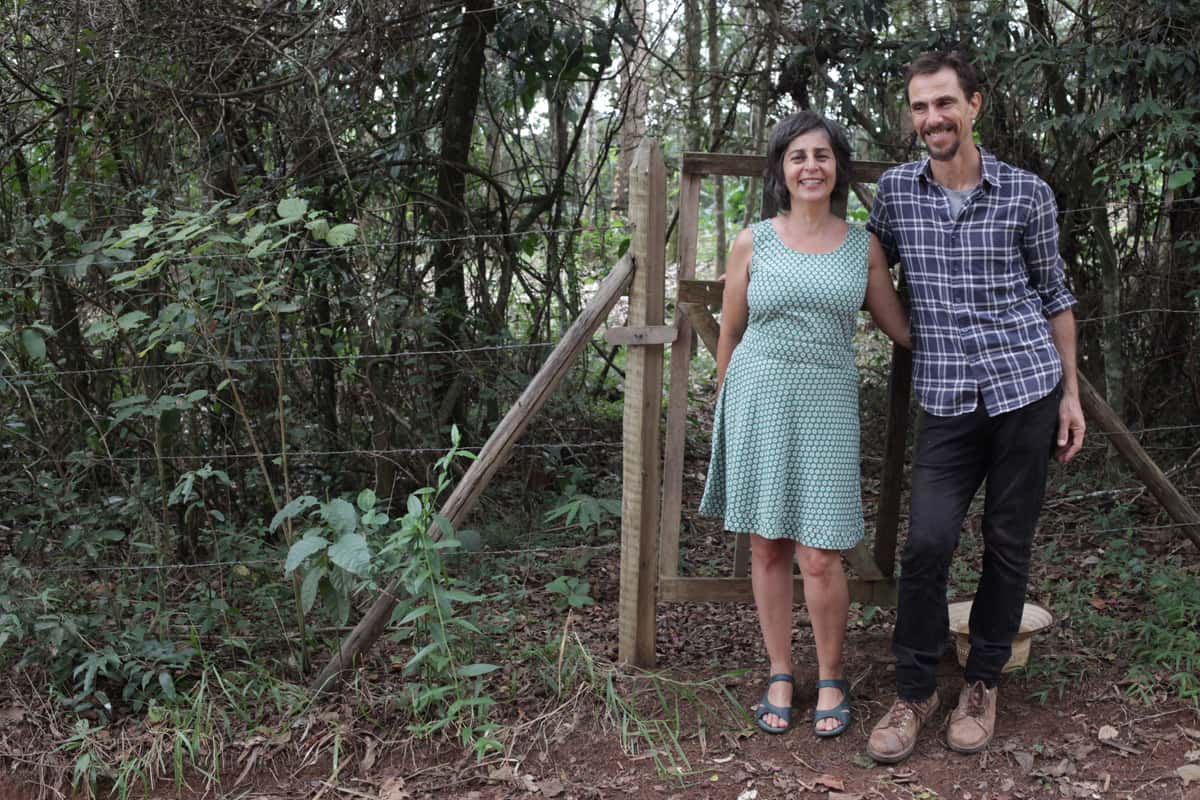 In a report for Tierra Nova Foundation, Miriam wrote: "For our own happiness and satisfaction, our children are very concerned about environmental, sustainable, and gender issues. Looking ahead at the future considering our daughters' insightful perspectives makes our challenges bigger and at the same time more exciting," Miriam continued.

"We are aware of the fact that, in order to keep our business growing, we must abide by some principles: respect for our own history, maintaining the soil alive, preserving water, stimulating and supporting bio and social diversity with equanimity."

Miriam continues to improve Fazenda Cachoeira's sustainable practices by converting new areas to organic farming and planting some legumes to enrich the soil. The farm has also diversified its market reach by raising other organic fruits, such as bananas and avocados. 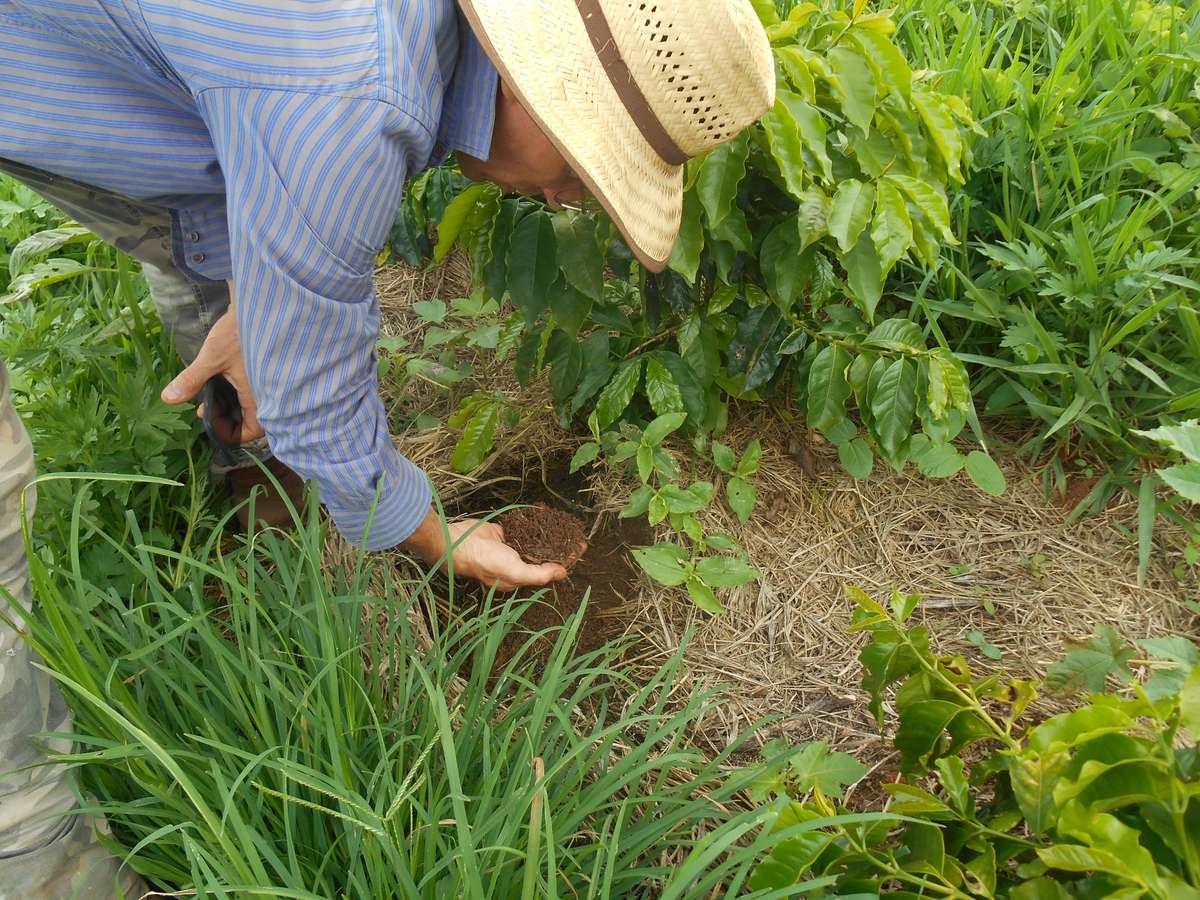 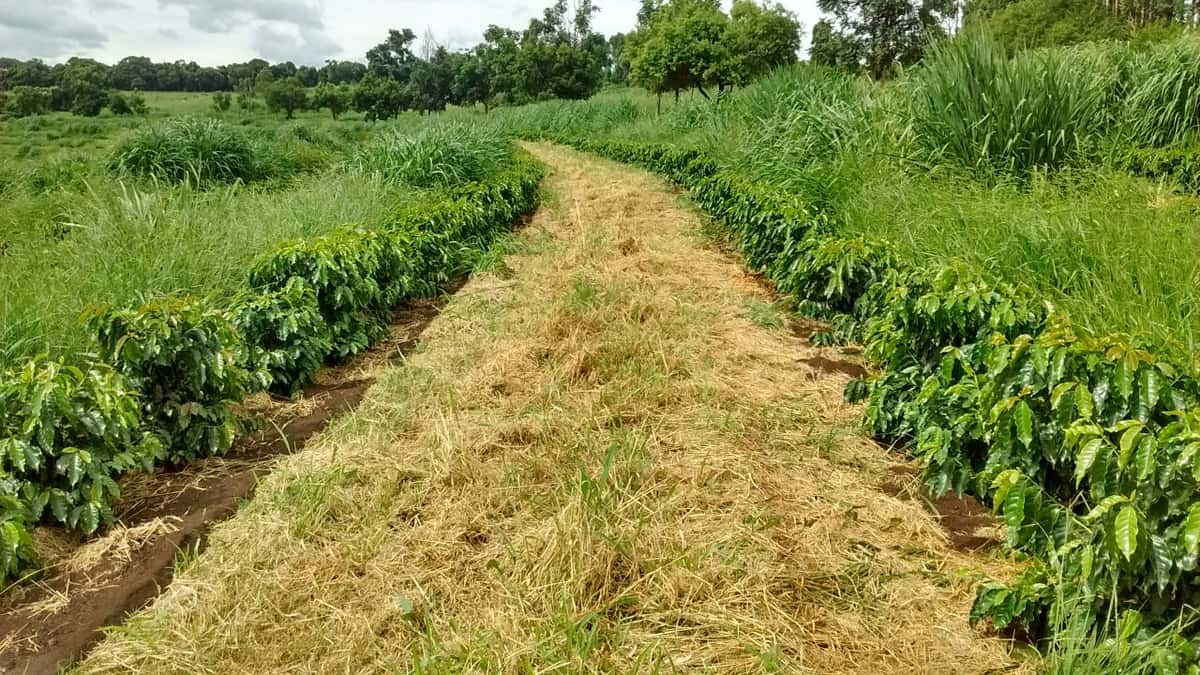 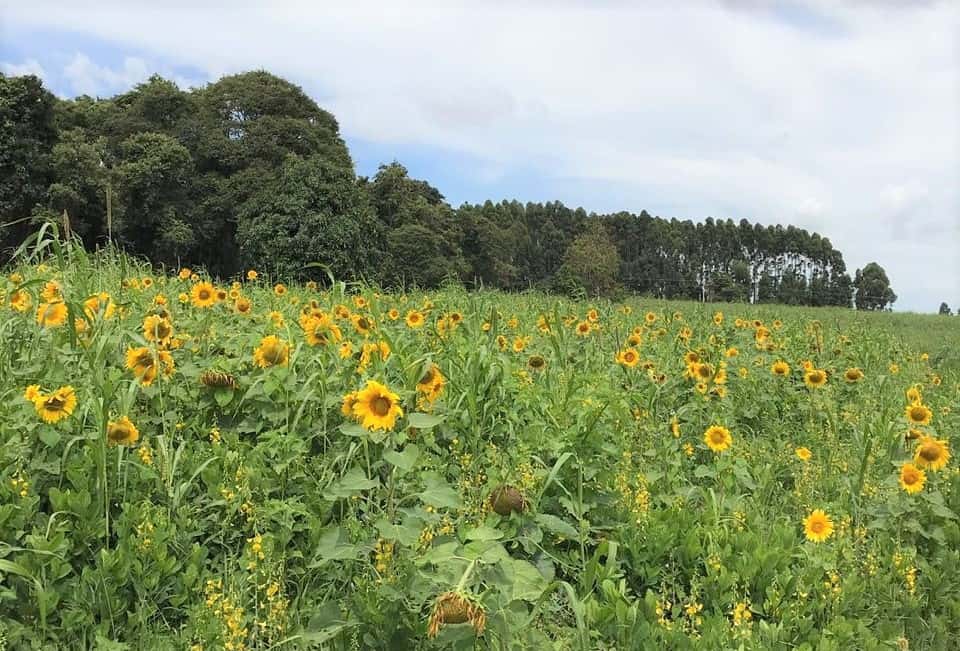 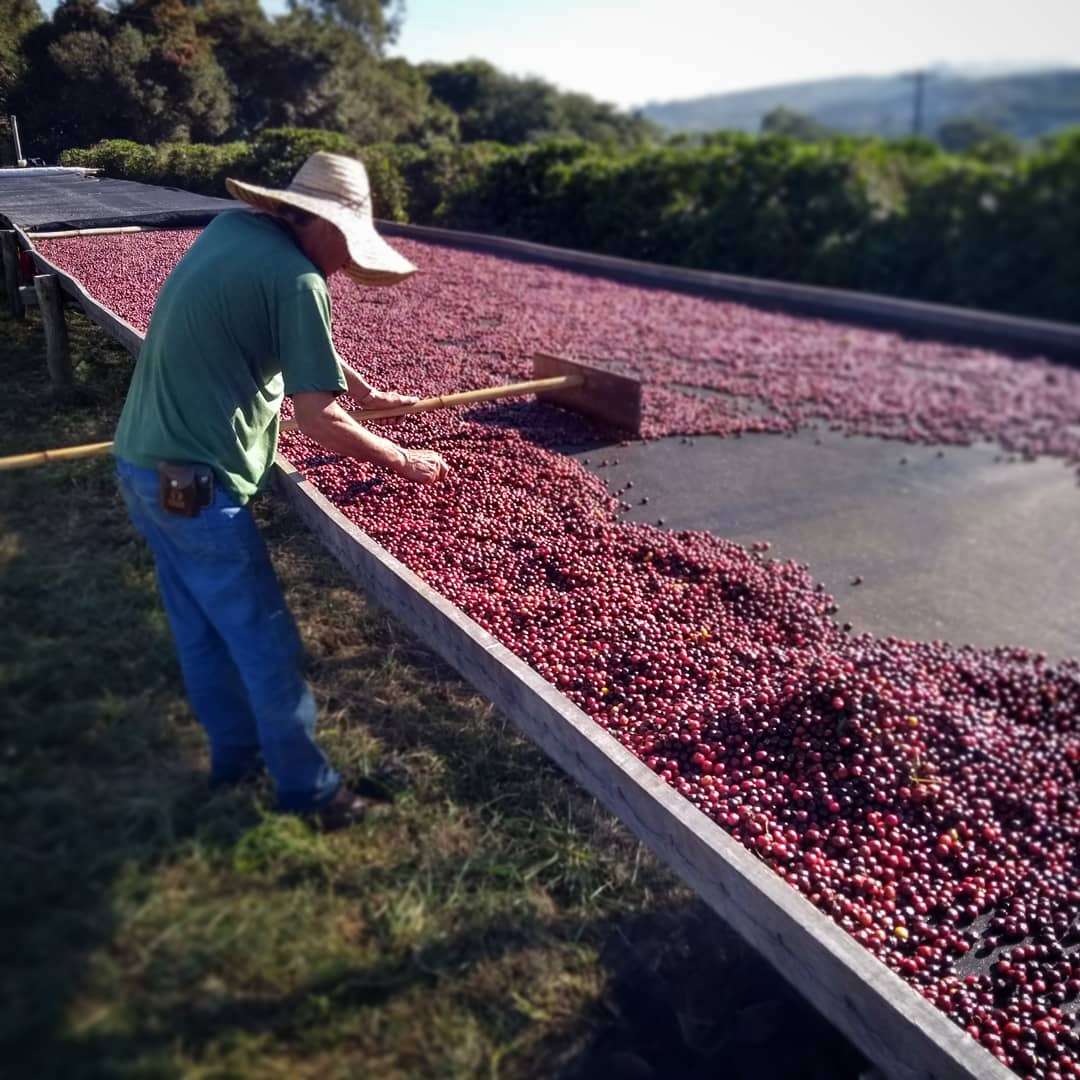 Coffee cherry fruit are spread out to dry on an African bed at Fazenda Cachoeira. African beds are basically raised screen tables commonly used in Africa to allow air to circulate more thoroughly than a patio would, resulting in more evenly dried coffee. 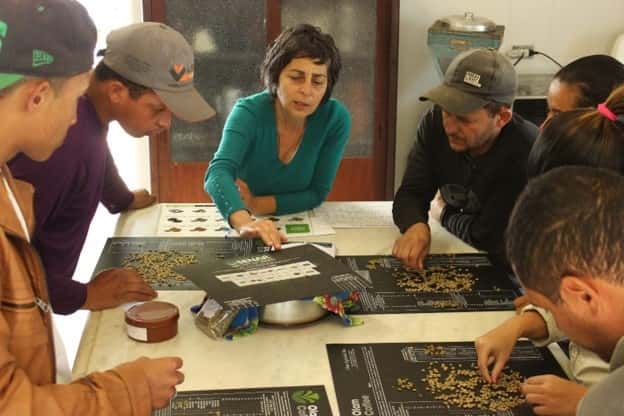 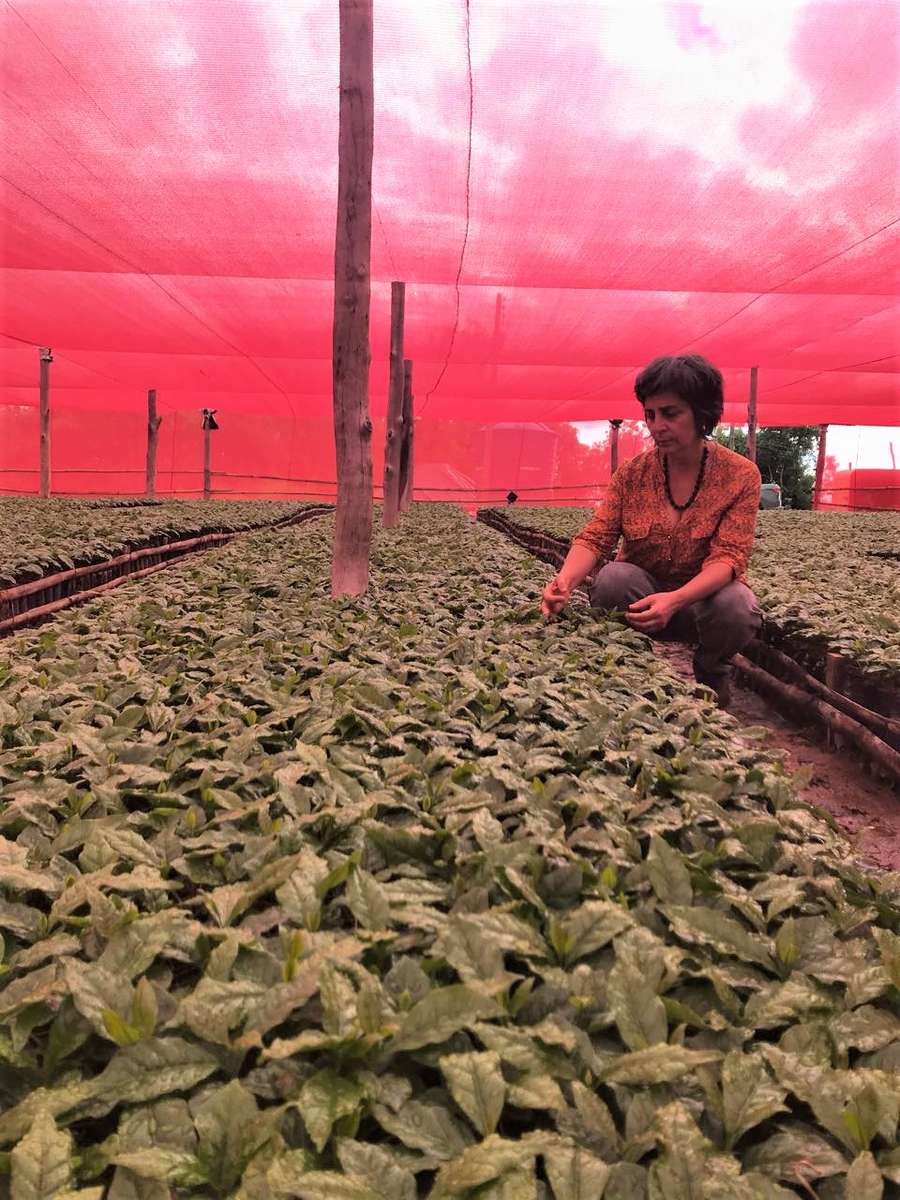 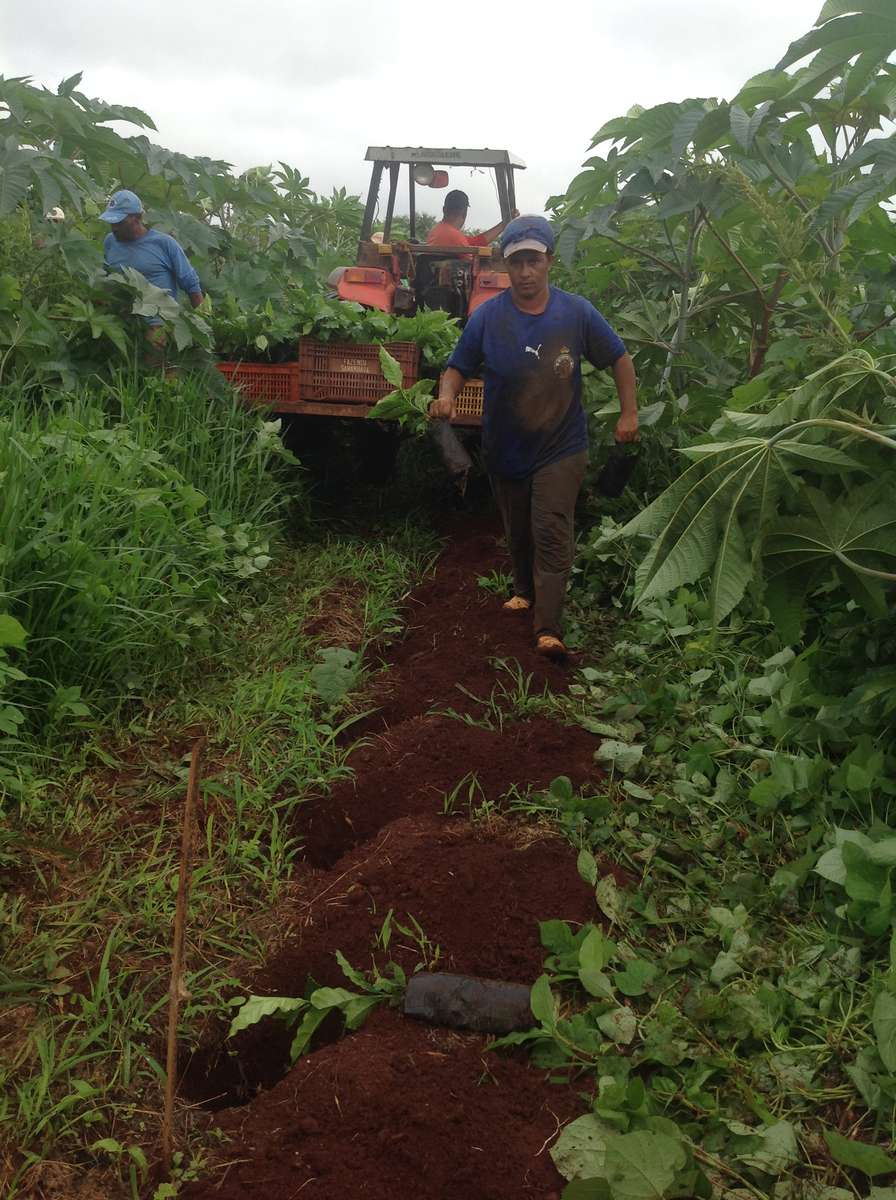 Miriam shares her extensive knowledge with producers by holding workshops on sustainable farming practices and quality control at Fazenda Cachoeira. She is especially interested in helping other women producers get their start and is a highly visible advocate for women in Brazil's coffee industry by serving as a member of the Brazilian chapter of the IWCA (International Women Coffee Alliance). 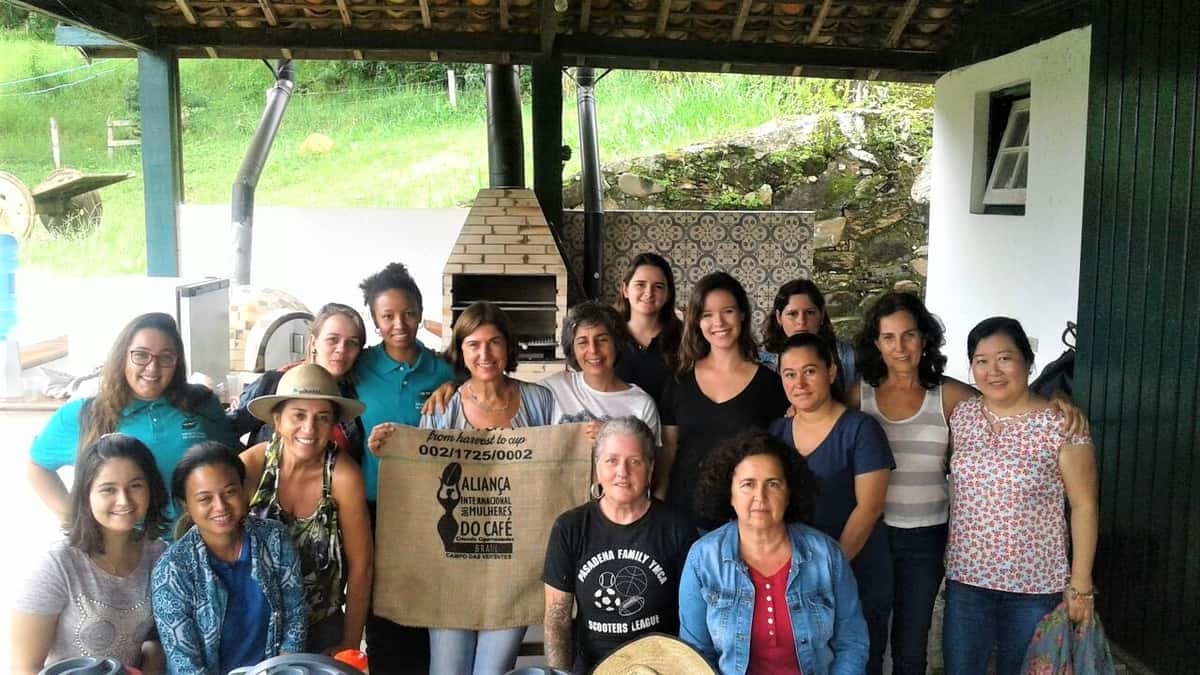 As Chief Executive Officer of the board of the Associação Brasileira de Café Orgânico (ACOB), the Brazilian Organic Coffee Association, "I've been given the opportunity to expand my vision on coffee sustainability in a more embracing fashion. That also involves networking to build common grounds in sustainability in the coffee chain, taking the producers' and the industry views into account," she wrote.

ACOB projects are focused on sustainable practices in coffee production and educational coffee quality training for farmers, prioritizing participation by women. Its goals:

"I strongly believe that quality education in specialty coffee production is a developmental tool that can be translated into better social conditions, knowledge, and better coffee flavors for our pleasure," Miriam wrote.

"I also truly believe in the power of this special and magic seed of connecting and gathering coffee growers around a common sustainability agenda." 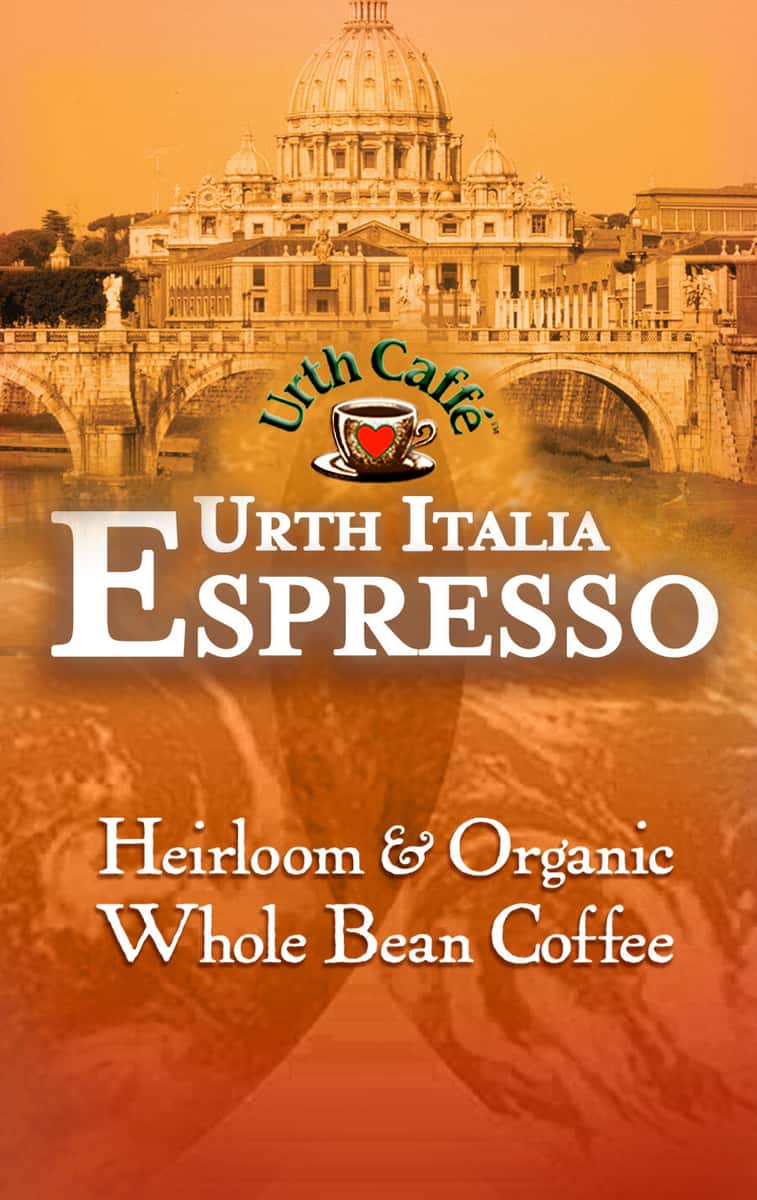 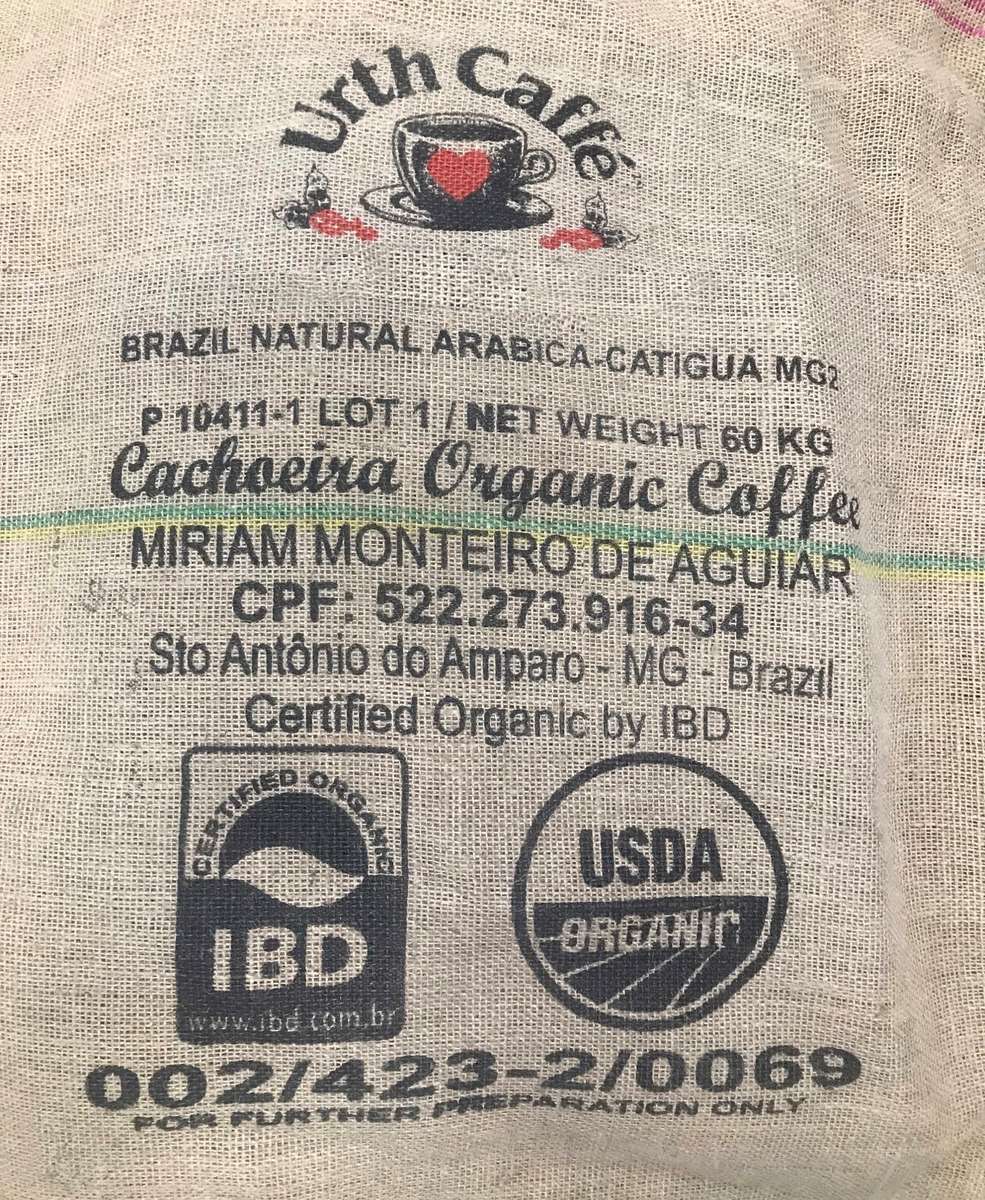